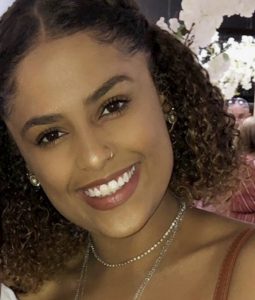 A graduate of Chelsea High School (‘19), Rosa Brito has just started at Clark University in Worcester where the coursework is well-suited for her career goals in the health sciences field. Clark has exceeded her expectations in terms of the friendliness and sense of unity among the students; the numerous clubs offered; the support for students through mentors, peer advisors and tutoring; the Connections transition program for multicultural students; and even the food! “I love this university; I believe I made the best decision to attend Clark,” delights Rosa.
Worcester is far from the small island of Brava in Cape Verde from which Rosa emigrated to the United States. Despite a late start speaking English, Rosa was an honor roll student at Chelsea High, challenging herself with AP courses and dual enrollment in community college. Very involved with her school community as a class officer, she also tutored, worked at the school store and ran track.
From 7th grade on, Rosa was a member of REACH, an after-school program supporting Chelsea students. During high school, she served as an Assistant Group Leader and tutor there, working with middle school students. Rosa also served on the REACH youth advisory council.
In the summers, Rosa worked in the St. Stephens Youth Program, creating science curriculum as a STEM specialist and later as lead counselor. Additionally, Rosa worked 12-20 hours per week with a second job in retail.
Asked if she has become as involved at Clark as she was in high school, she responded, “I am a part of the Black Student Union, Caribbean African Students Association, and I was elected as my hall representative.” So, yes, she has!