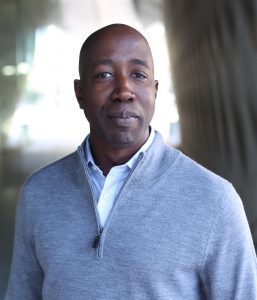 Kaine graduated from Bentley with a BS in economics and finance in 2003. He also holds an MBA from Babson College and worked in global finance for several years at firms such as E*TRADE, Merrill Lynch, Goldman Sachs, and others. He started ABLE Consulting LLC, which helped drive vision and growth for corporations under $10 million. Kaine is now the first Executive Director for the Black Cooperative Investment Fund (BCIF), a community-based organization rooted in self-help economics that proudly provides microloans to the Black Community. Throughout his career, he has focused on creating substantive community impact and has continually sought opportunities to use his unique skills to improve the quality of life for his community. As BCIF’s Executive Director, Kaine is a leading voice in building a critical mass movement of change based on cooperative economics, wealth building, and fiscal imperatives. He is positioning BCIF as a trusted messenger, ally, and action-oriented partner within the ecosystem of efforts to close the racial wealth gap. Kaine lives in San Pedro, California with his young family and enjoys finding time to teach finance and entrepreneurship to young kids and teenagers.

Nicholas grew up in Lynn, MA and went to Emmanuel College in Boston, graduating with a degree in Biology in 2017. 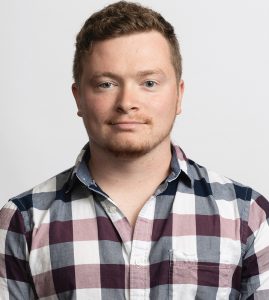 As a junior at Emmanuel, he was accepted into the Undergraduate Scholarship Program at the National Institutes of Health in Bethesda, MD. This program is for low-income students seeking a career in any STEM field. This program helped finance the rest of college and also provided him with a job for two years at the National Cancer Institute. There he performed research in CAR T-Cell therapy for pediatric malignancies, as well as research in immunotherapies for bladder cancer. While at the NCI, he was accepted into medical school at Tufts University School of Medicine in Boston. As a medical student, Nicholas has had the opportunity to perform research, one of the projects being on social determinants of health risk factors and their relationship with COVID-19 in Lynn, MA. This was particularly meaningful given it is the city where he grew up. Nicholas will be doing a research year in the radiation oncology department at Memorial Sloan Kettering in New York City before returning to Tufts for his 4th year. 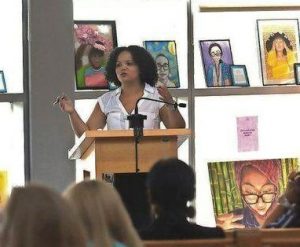 Following her graduation from Lawrence High School, Lidia obtained a Bachelor of Arts in Sociology from Suffolk University with a concentration in Criminology and Law in 2006. She began her career in public service as a social worker for the Department of Children and Families in Lawrence. She became involved in neighborhood groups and local school initiatives to encourage kids to stay in school and pursue higher education. After becoming a mother of two, Lidia returned to Suffolk University to pursue a Master of Public Administration degree. In 2014, she became a Probation Officer at Lawrence District Court, where she supervised hundreds of offenders to ensure their successful transition into the community. During this time, she facilitated programs to engage court-involved individuals to make positive changes in their lives, such as the Changing Lives Through Literature Program, Drug Court and the Motherhood Program. She also regularly participated in Career Fairs at the Lawrence Public Schools and the Lawrence Boys & Girls Club, as well as in programs to encourage young Latinas to attend college.  Lidia was named the Cultural Proficiency Champion of the Fenton Judicial Center to celebrate and promote diversity, equity and inclusion among trial court employees, visitors and users. She has served on the Board of Directors of Delamano, Inc., a non-profit organization that offers supportive services to survivors of domestic violence, and currently serves on Socratic, Inc., a non-profit organization that, among other things, offers scholarship opportunities to members of the Boys & Girls Club of Lawrence. In 2020, Lidia was appointed by Massachusetts Governor Charlie Baker as a Member to the Sex Offender Registry Board, where she currently proudly continues her public service determining the classification levels of convicted sex offenders residing and/or working in the Commonwealth. 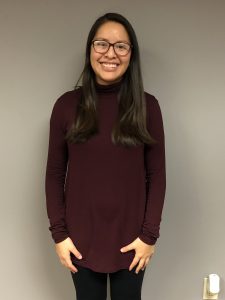 Arly Macario graduated from Suffolk University in 2018 with her B.A. in Government: Law & Public Policy and Sociology: Crime and Justice. Immediately following graduation, she worked at the English Language Center, a summer program at Boston University that serves International youth, and also served with City Year Boston under the AmeriCorps program at a K-8 elementary school in Roxbury, MA. Most recently, Arly was the College Access Coordinator at La Vida Scholars, making a huge difference with high achieving, low-income Lynn students as they created their paths to college and beyond. Arly is now pursuing her M.Ed in Education Leadership, Organizations, and Entrepreneurship at the Harvard Graduate School of Education. Good luck Arly! 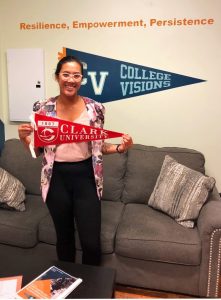 Tina Meetran graduated from Clark University in 2015 with her B.A. in International Development and Social Change with a concentration in Migration and Culture and a M.A. in Community Development and Planning. Following her studies, Tina returned to College Visions where she had received counseling as a senior in high school for her college search process. As the College Access Executive Director, she helped advise 70 low-income, first-generation 12th graders in support of their process to enroll in college. College Visions also follows their students through the college experience, resulting in a 65% graduation rate within six years, more than three times the national average for low-income, first generation students. While Tina studied at Clark, her future goals included working with refugees and immigrants. She recently created a guide entitled “Advising Undocumented Students in Rhode Island for College Access.” College Visions and the City of Providence has been fortunate to have one of their own giving back and helping RI youth access and graduate from college!